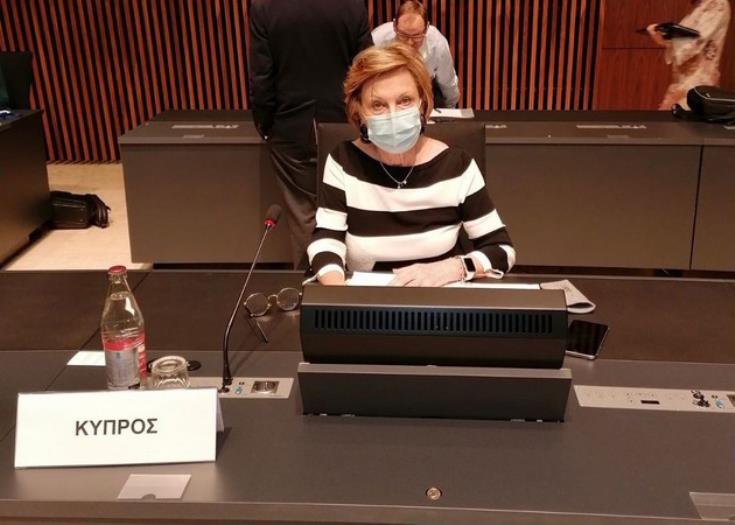 The Justice and Home Affairs Council, which met in Luxembourg on Thursday and Friday, discussed the creation of minimum standards for material detention, the EU strategy on the rights of the child, the issue of strategic prosecutions against public participation and the protection of journalists, as well as the latest developments concerning the functioning of the European Public Prosecutor’s Office.

In her contribution to the discussion, the Minister of Justice noted that this issue is a priority for the Republic of Cyprus and that these concerns are protected by the criminal justice system.

Drakou referred to the differences found in the EU on this issue and stressed that it would be beneficial for the EU to arrive at uniform standards on issues concerning the personal safety of detainees as well as their access to medical care. Drakou also said that Cyprus supports the application, when and where possible, of alternatives to detention such as the use of a watch bracelet.

The Minister also said that in the case of Cyprus, the time spent in pre-trial detention is counted in the total sentence imposed, which could help, in combination with other measures, to reduce prison overcrowding. Drakou also thanked Minister of Justice Didier Reynders for the intention of the Commission to support Member States with funding in this area.

Ministers also discussed the draft conclusions on the EU strategy on the rights of the child, which was presented by the Commission on 24 Marche 2021. However, during the discussion it became clear that no unanimity would be required to adopt these conclusions. Several member states have expressed their disappointment.

Drakou said Cyprus supported the draft conclusions and stressed that the interests of children should be at the center of EU efforts and guide actions by member states.

She also said that she shares the disappointment of the majority of member states, and stressed that the promotion and strengthening of children’s rights should be done without any discrimination, and that this should be a common European goal.

Over a working lunch, ministers had their first exchange of views on the issue of Strategic Public Participation Prosecutions (SLAPP), i.e. the use of abusive prosecutions against journalists aimed at to discourage the press from covering subjects of public interest. interest like organized crime. Ministers agreed to revert to the matter at a later stage.

On Friday, ministers held a debate on the digital dimension of investigations into child sexual abuse. They focused in particular on how access to data for competent authorities can be guaranteed in order to effectively combat these crimes. They also discussed the role of proactive measures from social media platforms, hosting services and electronic communications providers in tackling this phenomenon.

The minister stressed the need for the new proposals to hold communications providers accountable for the detection of this material.