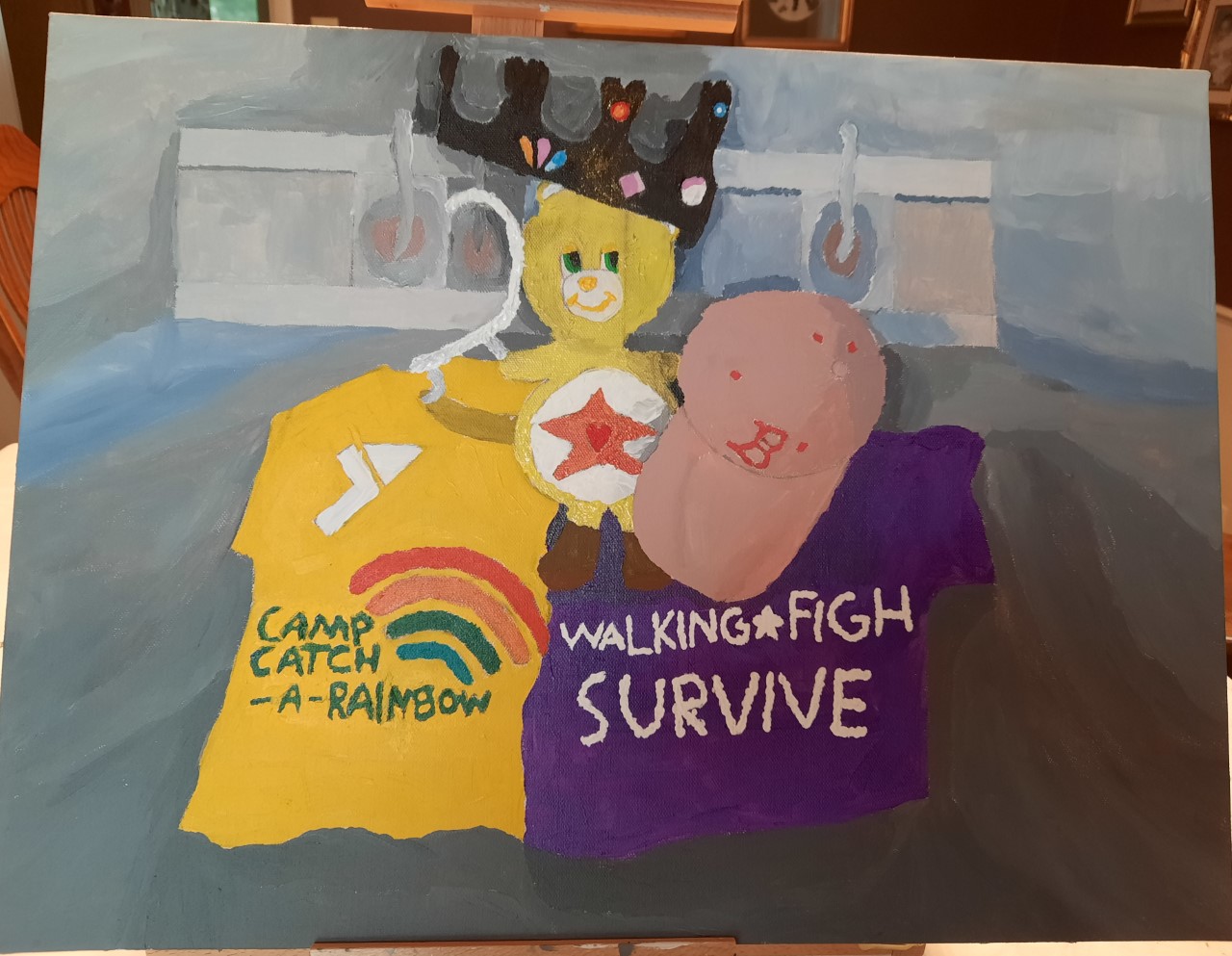 “I love the feeling of creating your own work and having people who see who you are,” Kendall said. “The way you make art can express who you are.”

Kendall was diagnosed with cancer at the age of four and a half, she said. At 21, Kendall is a 17.5-year-old cancer survivor.

The yellow shirt in the paint is from her last year at Camp Catch-A-Rainbow, a camp for children who are cancer survivors, Kendall said.

His experience with Relay For Life, a fundraising event for the American Cancer Society, is represented by the purple shirt. Because her first Relay For Life team was called “Kendall’s Care Bears,” she also included a Care Bear toy in the painting.

Kendall included the crown in the coin because she received it when she was considered the “Queen of Arts and Crafts” at Camp Catch-A-Rainbow.

“I added the Tiger hat because I’m a huge Tiger fan,” Kendall said with a smile.

Kendall also started a series of paintings depicting landscapes of places she visited.

“I love the geography, and even though people can’t go to the different national parks, I want them to be aware of the beauty,” Kendall said.

Kendall said she was most excited to paint Old Faithful, a geyser in Yellowstone National Park. She waits to paint the geyser until she learns the technique of representing water in motion.

Kendall said he had been painting since seventh grade, but had only just started to take it seriously. She describes herself as a growing artist.

Baking is also one of Kendall’s main interests. She said she had started cooking when her church asked

volunteers to make desserts for an event.

“It was a lemon butter pie,” Kendall said.

Her neighbor gave her a cookbook, with which Kendall continued to hone her pastry skills. She soon discovered that she liked to bake cupcakes.

She started out by following the recipes in the book, but then she started experimenting by modifying them.

For example, she modified a rainbow cupcake recipe to be what she called “surprise cupcakes”.

“Instead of making a rainbow cupcake, I used three or four colors and put them in random order, so you didn’t know what you’re going to get,” Kendall said. “That’s why I call it a surprise.”

It also adds different flavor elements, such as chocolate chips or cherries.

With the help of her boyfriend, Kendall plans to start a business specializing in cupcakes, which she would call Cupcake Art.

“Cupcakes are literally art,” Kendall said. “This is my definition of art: something that you do yourself and that you have invented yourself. It can be whatever you want it to be.

To see the menu of cupcakes Kendall is making and to order your own, email her at [email protected].