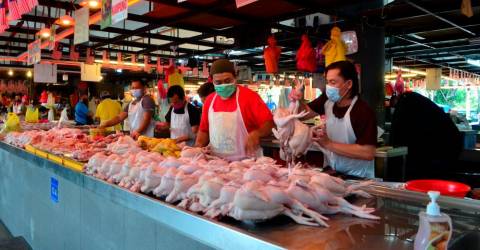 PUTRAJAYA: The price of chicken in the markets is starting to stabilize and this is a positive result of the engagement session with industry players, said Minister of Internal Trade and Consumer Affairs Datuk Seri Alexander Nanta Linggi.

He said the result of the engagement session with industry players, involving suppliers, chicken farmers and wholesalers, was that they did not exert any price pressure that would impact the market. retail price for consumers.

He said the mechanism for issuing notification letters under the Price Control and Anti-Profit Business Act 2011 was a soft approach that was fair and took into account the situation they were in. faced following the increase in feed for chickens.

“The notification letters serve as a reminder and instruction for companies at all levels of the supply chain to review their prices and make adjustments (as) so as not to affect the retail price for consumers in the markets “he said in a statement today on the chicken price issue.

Nanta said the continued rise in prices had previously stabilized thanks to the cooperation of suppliers and those involved in the marketing and supply chain of chicken.

According to him, 145 letters were sent to traders in all distribution networks to remind them and inform them that there was currently no drastic price increase practiced by companies.

He said, however, that the ministry would not hesitate to implement a deterrent enforcement by imposing permanent price controls if the prices of each chicken distribution network continued to rise unreasonably.

“Our current action is to monitor and verify that chicken prices are consistent to ensure that there is no manipulation of prices or profits by companies under the control mechanism enforced under the law. anti-profiteering, ”he said.

According to him, until September 14, 164 premises had been checked by ministry control teams across the country, involving 166 types of chickens, including live chickens, standard chickens and super chickens.

A total of 163 commodity information verification notices (NPMBs) were also issued to inspected chicken traders for detailed information on operating costs and purchasing costs, he said.

Nanta has so far said there are no signs of cartel action detected in connection with the price hike, but the ministry, with help from the Malaysian Competition Commission (myCC), will investigate On the question.

“The ministry understands the losses suffered by traders during the implementation of the movement control ordinance.

“However, traders in every chicken supply chain are reminded not to take drastic measures by raising prices to cover their losses. Intermediaries are also reminded not to seize opportunities by putting pressure on businesses and consumers, ”he said.

He said the ministry would hold ongoing discussions with the Ministry of Agriculture and Food Industry (MAFI) to ensure that the problem of high costs, including imported chicken feed, prices for chicken breeds and chicks that affect the price of chicken at the consumer level are minimized and well managed.

Nanta said a meeting and discussion with MAFI and the Ministry of Finance will take place to seek reasonable long-term solutions that can be implemented to stabilize chicken prices. Bernama