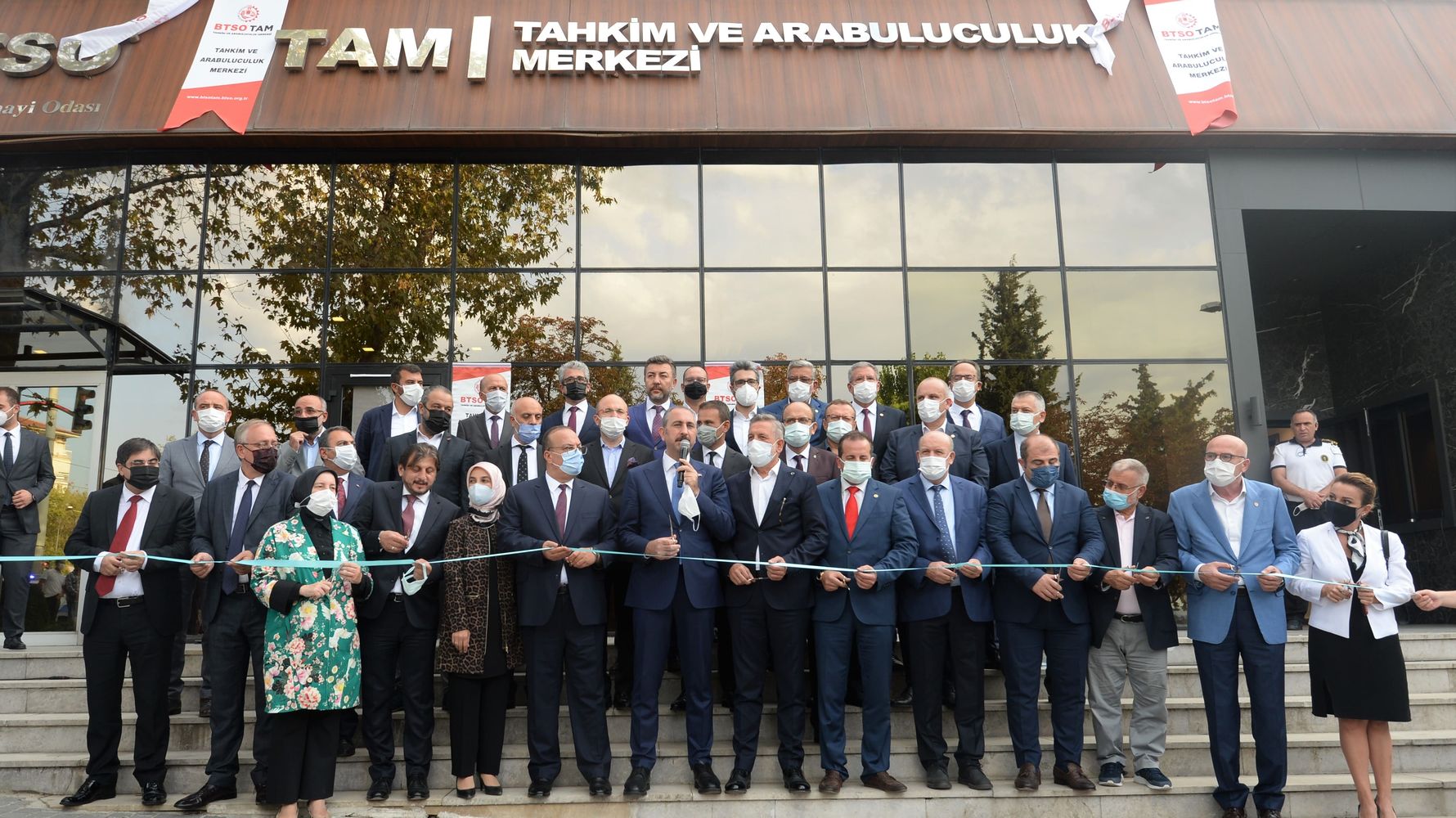 The renovated BTSO Arbitration and Mediation Center building, which contributes to the development of alternative dispute resolution methods within the Bursa Chamber of Commerce and Industry (BTSO), the umbrella organization of the business world de Bursa, was commissioned with the participation of the Minister of Justice Abdulhamit Gül. Minister Gül said that Bursa, together with BTSO TAM, has become one of the exemplary cities in the world for arbitration and mediation, like London and Frankfurt, and said: “As a ministry, we support all activities carried out with an understanding that seizes time and is open to development and innovation. ”mentioned.

BTSO, which set up the Arbitration and Mediation Center between Chambers and Exchanges in Turkey for the first time in 2015, has taken an important step towards the development of alternative dispute resolution methods in Turkey. The renovated BTSO TAM service building in Altıparmak was inaugurated with a ceremony. Speaking at the opening of the program, Justice Minister Abdulhamit Gül said that in addition to the courts, they have made important legal changes and institutional mechanisms that will set an example for the world in Turkey in terms pre-trial or alternative solutions to the court, to the legal community.

“A CENTER worthy of BURSA”

“I am very proud of the BTSO Arbitration and Mediation Center.” Minister Gül congratulated BTSO President Brahim Burkay and his administration for the vision of BTSO. Stating that a center worthy of Bursa has started to operate, Gül said, “BTSO is a very important center which is suitable for Bursa and prepared in accordance with the spirit of this enterprise. I congratulate BTSO and all its team. noted.

“A VISION THAT CATCHES AGE”

Stating that Bursa has become one of the exemplary arbitration and mediation centers in the world with BTSO TAM, Minister Gül said: “Bursa is one of the leading cities of our country in terms of economy. BTSO makes a significant contribution to making Bursa an industrial and investment city. Bursa has taken its place among the exemplary cities of the world such as London and Frankfurt in arbitration and mediation with BTSO TAM. It is also pleasant that training on arbitration arbitration is provided at BTSO with the cooperation protocol signed with the University of Bursa Uludağ and the International Arbitration Arbitrators Institution. As a ministry, we will support all activities carried out with current understanding and open to development and innovation. We will closely follow all suggestions from arbitration and mediation centers. We have a thousand-year-old Ahi tradition. We are a nation that solves problems through compromise. These centers will contribute to the desire to resolve conflicts. used the sentences.

Focus on the Singapore Convention

Stating that a country with a strong sense of justice and trust will also have a strong economy, BTSO Board Chairman Brahim Burkay said: “In this context, the signing of the Convention Singapore, in addition to regulations that meet the needs of our society and our business community, has enhanced our country’s legal certainty in the business world and made Turkey a foreign country. has made it an even more attractive country for investments. In addition, the development of arbitration and mediation opportunities that avoid the loss of time and reputation in business life are strategic steps both for professional life and for our legal system. used the sentences.

“WE WILL CONTINUE TO SUPPORT ARBITRATION AND THE MEDIA”

President Burkay pointed out that BTSO’s Arbitration and Mediation Center is part of an important ecosystem that alleviates the workload of the judiciary, lays the foundation for predictable investments and new business opportunities, and gives businesses time and a reputation in international trade. Burkay, who said that he conducted effective studies on the training of arbitrators, mediators and conciliators in arbitration in Bursa with BTSO TAM, who organized the first advanced mediation trainings in Turkey, said: We are also leading the training arbitration lawyers. The Arbitration Arbitration training, which is delivered in English worldwide, was organized in Bursa for the first time in the world by BTSO TAM as part of our collaborations. I would like to express my gratitude for all the practices implemented in consultation with our business community in matters of judicial reform, in particular our arbitration and mediation centers. As BTSO, we will continue to provide all kinds of support for the further development of alternative dispute resolution methods, especially mediation, in our country. Declaring that the legal regulation of mediation as a condition of litigation is part of BTSO’s demands, President Burkay thanked Minister Abdulhamit Gül for the implementation of this regulation.

“BTSO WAS INSPIRATION FOR TURKEY”

Bursa Governor Yakup Canbolat said that BTSO has made a significant contribution to the city’s economy with its projects with a global vision and said, “BTSO is the roof of our city’s economic powerhouse. BTSO has inspired many of our chambers with sustainable projects and policies with a global vision. BTSO also holds the title of the first chamber to set up a mediation center in Turkey in 2015. When looking at the mediation report, Bursa is the best performing city in Turkey in terms of population. I wish BTSO TAM is beneficial for our city and our country. he said.

After the opening, Minister Gül visited the renovated center of BTSO TAM and received information from the Chairman of the Board of BTSO TAM and Member of the Board of Directors of BTSO, Irmak Aslan, on the work carried out. Minister Gül also attended the consultation meeting held with the participation of representatives of the business community from Bursa within the framework of the program. Deputy Minister of Justice Zekeriya Birkan, Bursa MPs Refik Özen, Emine Yavuz Gözgeç and Vildan Yılmaz Gürel, Bursa Attorney General Gökhan Şen, Bursa Regional Court of Justice President Abdulkadir Şahin, Bursa Uludağ University Rector Prof. Dr. Ahmet Saim Guide, Vice-Mayor of Metropolitan Municipality Murat Demir, ministry bureaucrats, members of the BTSO board of directors and the presidency of the Assembly, as well as council chairmen attended.